1. I hear you have a chocolate lab in your romance novel, Ghostly Liaison. Tell us about the book. 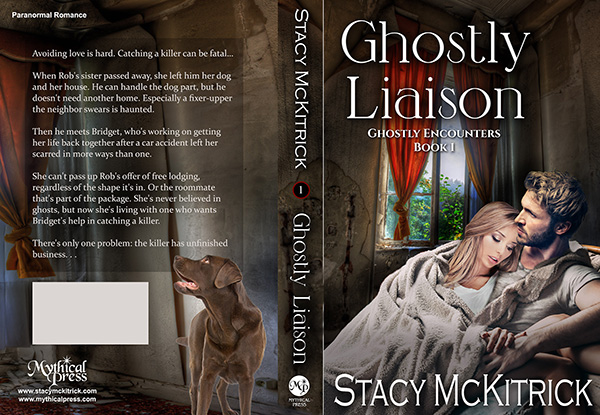 Ghostly Liaison is about a woman (Bridget), who discovers a ghost-seeing “talent” she inherited after a near-death experience, and the ghost (Charlie) she’s currently roommates with. Charlie’s brother, Rob, thinks she committed suicide via a drug overdose, because that’s how her killer set it up. Bridget decides to help prove Charlie had been murdered, but unsure how to go about it without sounding like a loony-tune or becoming the killer’s next target. Here’s the book blurb:

When Rob’s sister passed away, she left him her dog and her house. He can handle the dog part, but he doesn’t need another home. Especially a fixer-upper the neighbor swears is haunted. Then he meets Bridget, who’s working on getting her life back together after a car accident left her scarred in more ways than one. She can’t pass up Rob’s offer of free lodging, regardless of the shape it’s in. Or the roommate that’s part of the package. She’s never believed in ghosts, but now she’s living with one who wants Bridget’s help in catching a killer. There’s only one problem: the killer has unfinished business…

2. Why did you add a dog to Ghostly Liaison?

I’ve never included pets in any of my other stories, but thought a dog would do great in this one because I always think dogs can see more than we can. And I picked a chocolate Lab because it’s a dog I wouldn’t mind owning. (Unfortunately, having a pet in this time in our lives isn’t feasible or fair to the animal.) Barnaby (who I named as a tribute to our late cocker spaniel, Barney) is more than just a pet, though. He’s a real character in the story because he can see ghosts all the time, whereas Bridget can only see ghosts if she’s alone or with another ghost-seer. I had a lot of fun writing Barnaby and wish he were mine in real life. And maybe one day I’ll get my own chocolate Lab. They are just the cutest!

Besides the Ghostly Encounters series (which book 2 is now available!), I also have the Bitten by Love series, which features vampires. In fact, the hero vampire from Bite Me, I’m Yours, makes a cameo appearance in Ghostly Liaison (both books are set in Dayton, Ohio). My vampires blend in with the “real world,” and I thought it would be fun to actually show that. No one in Ghostly Liaison knows that vampires exist, and neither would the reader unless they read my vampire series. Both series are set in the same “world,” but I haven’t made an effort to cross the series because not all my ghost-loving readers like vampires. Maybe one day they’ll give them a chance, because my vampires are nice.

Promote? I gotta promote? Just kidding. Although… Promotion and I don’t get along so well. It’s why I hired Barclay Publicity for my latest release (Ghostly Interlude, Book 2 in the Ghostly Encounters series). I still have a lot to learn, but think in the end the best promotion is the next book. I just wish I were a faster writer, but it is what it is and I’m not going to force it.

I’ve got a blog I update fairly regularly and a Facebook page (links listed below). No Twitter, though (I just don’t have the patience for that one). I send a newsletter out once a month (or try to), where I tend to give away books and swag I’ve gotten at various conventions.

Thanks, Marcia, for featuring me on your blog! I love dogs and cats, and it’s fun when they’re featured in a book as an actual character (instead of a “thing” in the character’s life). I’m going to feature a parrot in my next Ghostly book (whenever I get to that one). My friend has a parrot who does these really neat things, and I just have to use him. He’ll be my comic relief.

Thank you, Stacy, for sharing your books and links! I can’t wait to read your Ghostly Encounters series! I was always a fan of happy ghost stories growing up, including The Ghost & Mrs. Muir.

I hope visitors to this pro-pet blog will share photos of their pets. Each month, I’ll randomly pick one of the pet photos to feature on my social media pages and in my reader newsletter. Go Pets!