(For Marcia James Newsletter Subscribers Only) 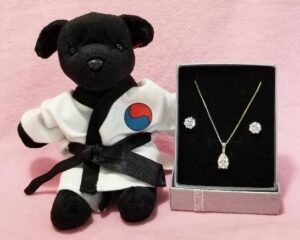 Smokey’s friend, Sly, is presenting this month’s prize–a Sterling silver & crystal necklace and crystal earrings! In addition, the prize includes Sly.  😉  The winner will be drawn on September 29th. Early each month, Marcia’s newsletter contains the contest question, and then newsletter subscribers can visit this page to enter the contest, using the entry form below. Website visitors who would like to subscribe to Marcia’s monthly newsletter to learn about future contests can sign up here:

* One entry per person per month. No purchase necessary.

* Odds of winning are determined by the number of entries.

* The winner will be chosen randomly from all entries and notified by email. Only the winner of the prize will be notified.

* Winner will have three weeks to respond to the email or another winner will be chosen. Author is not responsible for emails that bounce, end in spam filters, or are eaten by cyber cooties.

* The information submitted to this contest will not be shared or sold.

* Prize is as stated; no substitutions or exchanges.

IMPORTANT NOTE: Due to the rising cost of mailing internationally, my jewelry contest is only for winners living in the United States. International winners will receive 3 ebooks of mine instead of the jewelry prize. I apologize for having to make this rule change.