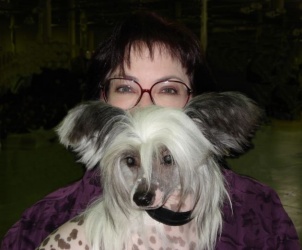 Marcia James finaled in eleven Romance Writers of America contests before selling her first contemporary romance. Her releases include Sex & the Single Therapist (the first in a comic romantic mystery series) and the “Klein’s K-9s Service Dogs” contemporary romance series. A national and international ebook bestseller, she writes hot, humorous romances featuring heroines you can root for, heroes to die for, and funny dogs.

In her eclectic career, Marcia shot neon sign maintenance videos, penned TV commercials as an advertising copywriter, and freelanced as a journalist. After years of dealing with such sexy topics as how to safely install traffic lights, she is enjoying “researching” and plotting her novels’ steamy love scenes with her husband and hero of many years. 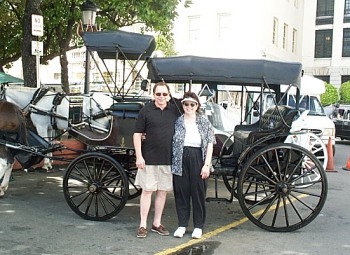 In her spare time, Marcia enjoys volunteering for non-profit organizations. One of the benefits is occasionally networking with celebrities. [See Photos.] Thanks to her involvement with good causes, Marcia asked her wedding guests to donate to charity vs. buying wedding gifts. Word of the “non-profit wedding reception” reached People Magazine, which covered the event. The Washington Post and Brides Magazine also published articles on the unusual fundraiser. 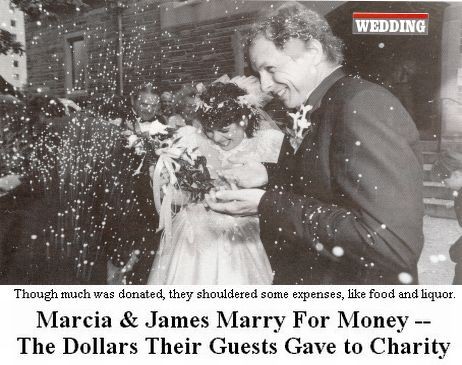 Did you know that author Marcia James…

* Wrote, produced, and directed training videos for the U.S. Navy? (She videotaped aboard nuclear subs, a minesweeper, a destroyer, and a tender.)

* Has an Interdisciplinary Masters degree in Communications and Creative Writing from American University in Washington, D.C.?

* Spent two days of her honeymoon fishing with her husband for rainbow trout in one of Kauai, Hawaii’s beautiful reservoirs?

* Was a medical writer for hospitals and organizations, such as the Visiting Nurse Association?

* Petted a dolphin in the Florida Keys and rode an elephant in California?

* Worked as an advertising copywriter, developing everything from print ads and brochures to radio and TV commercials?

* Spent an evening as the media escort for Tom Selleck during a U.S.O. event? (Held at Washington, D.C.’s Kennedy Center, it was a televised, celebrity-filled Bob Hope birthday special.)

* Received her first rejection letter – a personalized one vs. a form letter – for a poem she submitted to Good Housekeeping Magazine when she was in middle school?

* Worked as a production assistant on a Chinese beer commercial? (Her husband was one of the extras in the crowd scene.)

* Wrote a short play in the seventh grade for the Latin Club featuring a risqué song that prompted the teacher to send a concerned note home to her parents?

* Won a week’s stay at a resort in an online contest?

* Was a movie extra in a church scene for the War and Remembrance miniseries. (The part required 1940s dress, hairstyle, and make-up but no acting, thank goodness.)

* Started writing poetry by the second grade and continued to write creatively for fun?

* Inadvertently made Steve Martin laugh at an American Film Institute event? (From off-stage, she was using ineffective hand signals to guide a sound tech to where director Martin Scorsese sat.)

* Worked as a sound technician for an NBC-TV affiliate in Maryland? (This was a challenge, given the weather girl’s sometimes salty language.)

* Organized the pre- and post-party entertainment for the Washington, D.C. movie premiere of Dirty Dancing? (This was just one of the movie events she participated in for organizations like the American Film Institute and Women in Film & Video.)

* Had youthful ambitions to be a zoologist and work for a performing animals park?

* Once asked actor David Niven, who was appearing on an interview show she was attending, what Scotsmen wear under their kilts? (The answer? Nothing.)

* Was part of the first 50% male/50% female undergraduate class at the previously all-male University of Virginia?

* Plays golf and loves to drive from the men’s tees?

* Took four state beauty queens on a singing and dancing tour of Veterans Administration hospitals during her time with the USO?

* Presented workshops on author self-promotion and adding humor to books?

* Has interviewed or spoken with a wide variety of celebrities – from Oscar-winning documentary filmmaker Charles Guggenheim to vaudeville and movie comic Eddie Bracken? (One of her favorite memories is literally bumping into George Burns.)

* Played the cello poorly for a year in elementary school?

* Appeared on a Central Ohio TV station’s news show for a segment on romance writing?

* Collects snail figurines and has over 1,000 of them in glass, ceramic, metal, and wood? (Check out the caricature of Marcia on her Contact Me page.)

* Won a caption-writing contest for a national comic? (see below) 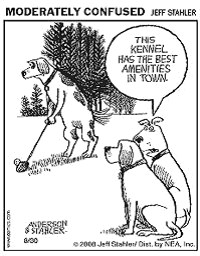 Among a slew of top-shelf entries for the 20th caption contest, one from Marcia Anderson stood out. “No one else, including me, saw this drawing through an upscale kennel,” said Jeff Stahler, editorial cartoonist for The Dispatch and creator of Moderately Confused, the comic used in the contest. “This was unique and clever.”

“My husband and I have been looking for places to have my mother’s 80th birthday (celebration),” said Anderson, a romance writer with the pen name Marcia James. “We were trying to find places that had their own golf course or a course nearby.”

The timing couldn’t have been better. Her punch line can be found today on Page D7 — and in about 1,200 other newspapers, too.