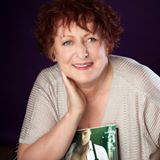 Each book features a former military man building a civilian life in the small North Carolina town of Westhorpe Ridge. Although linked, they each can be read as a sexy, stand-alone romance.

Check them out for a marriage of convenience, a spy story, a second chance romance featuring a secret baby, and rip-roaring adventure when those pesky mobsters reappear.

2. Why did you add a dog to this series?

As a child, I thought dogs ruled the universe. I once asked a butcher friend for seven bones so I could give one to every dog on our street. Not sure how he felt, but the dogs loved me.

I had a Welsh Terrier called Moxenville Laurence. (We called him Larry.) His pedigree stretched for ages. For those who don’t know, a Welsh terrier is a sort of miniature Airedale crossed with a teddy bear.

A typical terrier, Larry was as fierce and as loyal as they come. He was the runt of the litter, and the breeder said he’d never amount to anything. We fooled ‘em.

Raised on love, Larry thrived. Dog breeders offered us lots of money for him, but he was part of the family. No way would we part with him. He was as bright as they come. Every day, at 2pm he brought my mother his lead. I’m not sure who took who for a walk, but the pair of them loved it. 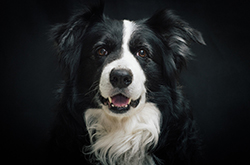 When I wrote the first book in my Heroes of Westhorpe Ridge series–Marriage, Mobsters, and the Marine, I needed a reason for the local sheriff to walk on the beach. My solution, give him a dog. It needed to be loyal, intelligent, and well behaved. I plumped for a Border Collie and called him Duffy (after Homer Simpson’s favourite beer).

In my second Heroes of Westhorpe Ridge book, Sex, Scandal, and the Sheriff, Duffy’s owner gets his own story. A former SEAL, he tries to run my heroine out of town. Of course, as the sheriff, he thinks he has a good reason. Fortunately, Duffy charms my heroine and ensures she interacts with his owner.

Duffy comes into his own in my third Heroes of Westhorpe Ridge book, Desire, Deceit, and the Doctor. His owner’s on holiday but Ben, son of the single parent hotel owner, is looking after him. Only someone’s out to kill Ben and his mother. Duffy saves Ben’s life. So does Adam, a former army doctor and–although he doesn’t know it–Ben’s father.

There’s a fourth Heroes book–Submission, Secrets and the Soldier. Duffy doesn’t feature much in this one, but it is my favourite of the four. Perhaps because I got to research PTSD to explain Luke’s character. The heroine has a bit of me in her in that she’s eager to please. People have used her, but despite his own problems, Luke helps her find her own way.

I’ve written paranormal, contemporary, and historical books. My original publisher, Loose id, decided it couldn’t compete with Amazon and closed its doors. My book rights reverted to me, and most of my books are available on Kindle Unlimited. 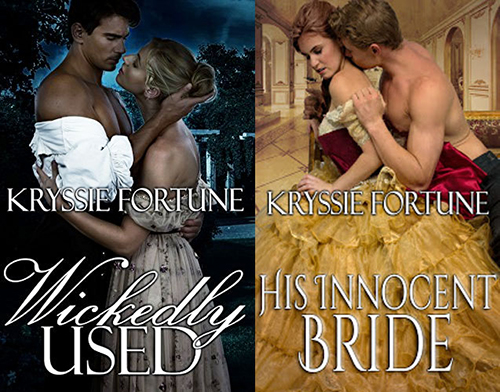 Fortunately, found a new home with Stormy Night Publications. They’ve published my two extremely naughty historicals–Wickedly Used and His Innocent Bride. These were my first books to make the top 100 on Amazon. That was a huge deal for me. I was so excited I screamed–and woke my husband who I’d left in bed. He shot into the front room thinking someone was attacking me! 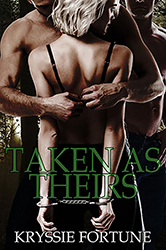 My paranormal book, Taken as Theirs, made number ten on Amazon. Cue more screams and me jumping around like a loon. It’s a sexy paranormal adventure set in a post-apocalyptic world where werewolves are the dominant species.

Blurb: As a breeder–one of the few fertile women left in a ruined, plague-ravaged world–Cassie would fetch a handsome price at auction, and selling her to the highest bidder was exactly what her captors had in mind…until two fearsome beasts decided to take her for themselves.

Eli and Dane have chosen Cassie for their mate, and when she makes a foolish attempt at escape, she quickly ends up tearfully promising obedience as her bare bottom is soundly and shamefully punished. Her body’s response to their stern dominance cannot be denied, however, and it isn’t long before she is screaming out her intense, helpless pleasure as she is roughly and thoroughly claimed. But will Eli and Dane’s pack accept a human girl or will Cassie be an outsider forever?

Publisher’s Note: Taken as Theirs includes spankings and sexual scenes. If such material offends you, please don’t buy this book.

Or READ FOR FREE ON KINDLE UNLIMITED

5. In addition to the above links, where can readers learn more about your books?

Since the majority of my books are available on Kindle Unlimited, they are only available on Amazon. I’d love you to check out my Amazon Author Central page: https://www.amazon.com/Kryssie-Fortune/e/B00J5AQOBU?

Marcia James: Thank you, Kryssie, for stopping by my Go Pets! I look forward to reading your romantic novels!