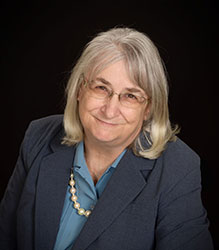 1. I hear you have amazing equines in your fantasy romances. Tell us about the books. 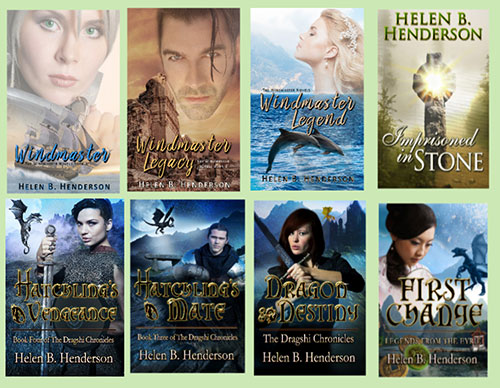 In most fantasy worlds, horses and sailing ships are two of the most common means of transportation, besides flying on dragon back, of course. But the horses in the Dragshi Chronicles and the Windmaster Novels are more than just animals. They are characters who happen to be able to gallop. They are the seidheirn of the Dragshi Chronicles and the falaire of the Windmaster Novels, magical creatures of intelligence, with unusual speed and stamina. A toss of their mane or stomp of their hoof communicates as clear as spoken words. They also have their own unique personalities. If a groom isn’t available (or is unwilling) to open a stable door, a smash of the hoof will achieve the goal. But they will look sheepish afterwards and explain, “I couldn’t find anyone to help me. So I helped myself.”

What I liked best about the falaire and the seidheirn is their loyalty and friendship to their chosen riders. The mounts were more than transportation, they were confidants and their stolid nature provided comfort. In the case of Talann and Glyn in Hatchling’s Mate and Hatchling’s Vengeance, the emotional support was especially needed. Everyone expected Talann to be a dragshi and be able to take on dragon form. But no dragons sang a welcome at this birth. And Glyn had a secret that no one could every know. The loyalty and fighting ability of the seidheirn was recorded in a tune sung in Dragon Destiny called the “Battle Hymn of the Seidhern.” The tune was not used to inspire men before a battle, but to quiet rioting animals who panicked during a wall-rocking winter storm.

Earth magic allows the equines to gallop without leaving behind the sound of hoof falls and presents the image that they are nothing more special than a slightly large horse. A special talent of some falaire was the ability to boost their human friend’s magic with their own earth magic to make the mage’s spell even stronger. There are legends told of falaire who swim with shipfish in the deep oceans and soar with the birds. I won’t say what the head stallion Taerneach did, but the truth of one of the legends appears in Windmaster Legacy after a leap from a cliff. 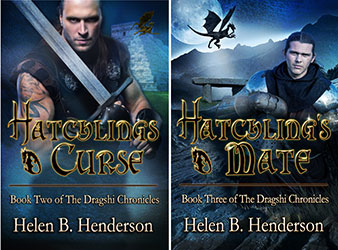 About the Dragshi Chronicles: The dragshi are two beings, one human, one a dragon, who can change forms with the other at will. However, freedom of the skies comes with a price. Excerpts and more at https://helenhenderson-author.blogspot.com/p/the-dragshi-chronicles.html.

About the Windmaster Novels: Cast off and fill the sails for love and adventure. However be warned. Destiny cannot be avoided –especially when love controls the journey. Excerpts and more at https://helenhenderson-author.blogspot.com/p/the-windmaster-novels.html.

Windmaster – Revenge set Ellspeth and the archmage, Dal, on the path to her destiny, but prophecy controlled the journey. Adventure, magic, and the search for a hidden treasure in an epic fantasy. http://books2read.com/Windmaster

Windmaster Legacy – Dal must make an impossible decision—Rescue Ellspeth, save his mother, or thwart Bashim’s plans. As archmage, he might be able to survive killing the future of magic, but as a man could he live with the knowledge he caused the death of a loved one. http://books2read.com/Windmaster-Legacy

##NEW RELEASE – Windmaster Legend – A forbidden love. An impossible quest. Threats to life and career. If love survives, there is one more challenge—the accusation of witchcraft. https://books2read.com/windmaster-legend/ 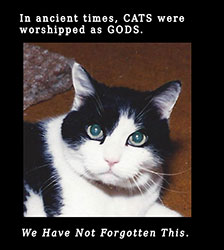 2. Why did you add the equines to the series? Have you had pets that inspired you?

For more than fifteen years, my house was ruled by a tuxedo cat. During our walks around the neighborhood on harness and lease, he ignored the barks of dogs or greeted them with a sophisticated meow giving his name as, “Cat…Tighe Cat.” 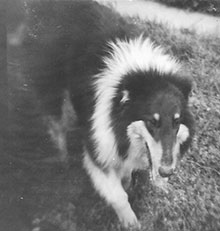 During my childhood, collies helped corral sheep and cows, and sometimes children. However, at this point in my life, my household is without a ruler who prefers to walk on four-feet and chase birds. A cat or dog wouldn’t fit the lifestyle. As a caregiver, we’ve worked too hard to eliminate the granny shuffle. But with an animal around, the shuffle is needed to ensure no one is blocking your path. And no cat likes to have his tail stepped on.

That doesn’t mean I’m without animal companionship. I am an adopted member of a pack that consists of a Siberian Husky, a Golden Retriever, and their human family. When I visit, Shadow, as the self-perceived alpha female, races over and garrulously greets with demands for pets and polite inquiries as to our day. Haley walks over more sedately as befitting her years. There is a comfort to the weight of a dog on your feet (at least before circulation stops) and a sense of being loved when they sit with their head on your lap.

For this post, the pet I’ve chosen is not a dog or a cat, but a magical equine. I have a personal connection to horses. When growing up, there was Fury, Flicka, Scout and Silver, Tornado, and of course, Trigger. (If the names don’t ring a bell, an online search will educate.) A Shetland pony graced our farm. No small creature, he was large enough to be ridden by an adult. And I broke my first bone because of him. Note to self—don’t ride without a saddle. An occasional ride on wooden trails when on vacations has kept the interest in horses alive. A bucket list item would be a horseback glamping trip in Wyoming or Montana. 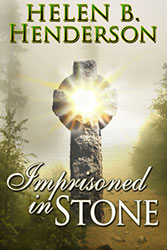 Besides the two fantasy series, I’ve also written a dark fantasy/romance. Imprisoned in Stone. For the crime of healing without payment, the Brethren imprisoned Dylan’s soul in stone. Centuries later, he felt the touch of another’s mind and hope for escape from his eternal prison soars. However, his potential savor’s only knowledge of him comes from an eerie message on the wall and nightmarish dreams. And, she is unaware of her latent magic–the power needed to free him.

A spell kept secret for generations.
A brotherhood thirsting for power.
Demands that cannot be obeyed.
A woman who stands to lose everything.

While the work isn’t a romance, several stories in the collection Hearth and Sand: Stories from the Front Lines and the Homefront are a love story or have a romantic element. Hearth and Sand are twelve tales of those who served on the front lines and the stories of loved ones left behind who preserved the homefront. Set universes apart and separated by decades in time, the stories in Hearth and Sand reflect a continuity of service from the past to the present and into the world of tomorrow. The tales cross genre from contemporary to historical, and science fiction to poetry. Although the events are fictional, the voices captured within these pages came from historical notes, veterans’ own words, letters left by their ancestors, or contemporary events. Pen was put to paper while watching fighter planes land in the Philippine Islands and in the shaded woods of a stateside farm.

4. Tell us about your kudos or reviews

Kudos and reviews, that’s a hard one for someone who prefers to be in the background. However, here are a few kind words acquired not by me, but the stories and characters whose tales I’ve had the privilege of presenting.

The tales of Captain Ellspeth and Lord Dal as recorded in the Windmaster Novels have been described as “A great read by an author with magic in her veins.” Comments about Windmaster include, “This beautifully crafted novel is filled with fascinating characters, both two- and four-legged” and “An intriguing fantasy that kept me riveted from the first page.” Windmaster Legacy was described as “a beautifully written, powerfully evocative sequel.”

For those who prefer to fly with dragons rather than hang out with mages, there are the Dragshi Chronicles. What has been said about the books is, “one of the best dragon shifter stories I have ever read,” “a fascinating fantasy world with engaging characters,” “An enjoyable fantasy read, especially for fans of dragons,” “Any fantasy lover would enjoy this epic tale!” and “a very unique story with a truly exceptional plot.”

5. What is one thing readers might be surprised to know about you?

In a past life, I was a correspondent and feature story writer. Among the topics I wrote about were history (including military history), antiques, and military weapons. People who see me in a suit giving a lecture on how to create a novel notebook would not recognize me at a reenactment with a reporter’s pad and press badge hung low on my fatigues or in hoop skirt and wide-brimmed hat carrying a basket with my camera and recorder covered beneath a piece of gingham material. The historical research and additional backgrounds in creating computers and running a museum provide an unusual insight into building not just worlds of the past, but of the future.

Helen invites you to join her on travels through the stars, or among fantasy worlds of the imagination. Connect with her online at her blog: helenhenderson-author.blogspot.com, as well as:
Facebook—https://www.facebook.com/HelenHenderson.author
Twitter—https://twitter.com/history2write
Amazon—https://www.amazon.com/Helen-Henderson/e/B001HPM2XK
Goodreads—https://www.goodreads.com/author/show/777491.Helen_Henderson

Marcia James: Thank you, Helen, for stopping by my Go Pets! blog! I look forward to reading your books!

READER INVITATION: Want to win a FREE ebook? Visitors to this pro-pet blog can join in the fun and share photos of their pets for a chance to win one of my ebooks! Each month, I’ll randomly pick one of the pet photos to win and to feature on my social media pages and in my reader newsletter. To leave a comment and a photo, click on the word “Reply,” which is just below the social media icons for THIS interview. (Don’t scroll past this interview to the next interview.) Go Pets!