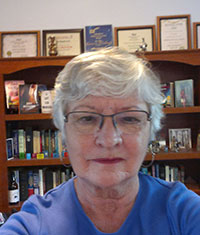 Yes, there is a dog in Programmed for Danger. Mac is my heroine’s beloved companion mutt. When someone asks if he’s friendly, she replies: “Worse. He has a generalized love for humanity that borders on neurotic.” He’s also quite fond of pizza!

The quick blurb for Programmed for Danger: Computer programming isn’t usually a dangerous occupation, but Andrea Kingston finds herself fighting for both her love and her life when she’s hired to solve Ferverill-West Company’s computer problems.

The book was originally published by Avalon Books, but is now available as an ebook from the usual ebook outlets.

2. Why did you add a dog to Programmed For Danger? 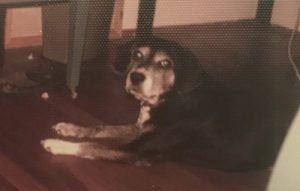 Gremlin. The pictures are old and somewhat faded, I’m afraid.

My heroine Andrea has a snug little house in the country, but wanted a dog for protection. What she got instead was Mac, a mutt who loves everyone.

Over the years, our family has had a lot of pets, but at heart, I’m a dog person. My very first pet, acquired shortly after my husband and I got married, way back when, was a dog named Gremlin. He was part beagle, part dachshund, and very affectionate. We had him for fifteen good years. Shortly after he died we were adopted by a cat named Tiger Henry who lived in the neighborhood, but in a household where he wasn’t all that welcomed by several already-in-residence felines. The neighbor finally conceded ownership of him to us. Over the years we’ve also had a parakeet, a rabbit, a couple of gerbils, and more hamsters than I can count. 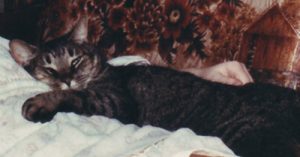 Tiger Henry, lying on the couch with my youngest daughter.

3. What other novels have you written?

Lots of them! I’ve had fifteen novels published since I sold my first romantic suspense novel to Avalon in 1989. Programmed for Danger was actually the second novel I sold, but a couple of years ago I got rights back to all of my old Avalon books and republished them as ebooks. Since it involved computers, I did an extensive re-write of it prior to re-releasing it. I’ve also had half a dozen or so novellas and a bunch of short stories included in various anthologies and some are now also available as ebooks. I write and have been published in several genres: romance, romantic suspense, fantasy, paranormal, and mystery. A few of my most recent re-releases are shown below. 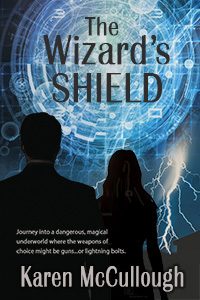 Argh! I hate beating my own drum.  But I’ve won several awards, including an Eppie Award (now the Epic E-book Award) for best fantasy novel (The Rainbow Bridge, now re-titled, Wizard’s Bridge) and a Vixen Award for the book now titled The Wizard’s Shield. I’m a four-time Eppie finalist, and a finalist in the Daphne, Prism, Rising Star, Lories, and the International Digital Awards.

You can find a list of all my currently available books, my bio, sign up for my newsletter, and visit my dragon collection at my website: http://www.kmccullough.com/

Other places I hang out: