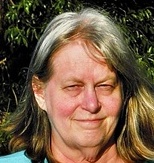 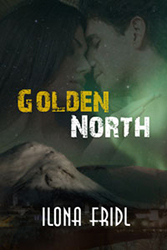 Golden North is the second book in my Dangerous Times series. There are three altogether, but I wrote them so they could stand alone. The story is about the two Shafer brothers, Josh and Zeke, who move to Juneau, Alaska in the early 1920s. Josh had purchased the old gold rush era opera house to fix up. Where the pet comes in: Zeke’s wife Addy decides they have to do something about the mice in the building, so she gets a calico cat named Chloe from a restaurant owner who has cats to keep mice out of the food storage. Chloe later plays into a murder mystery.

Josh Shafer has purchased an old run-down theater and bar in Juneau, Alaska Territory, to get away from his abusive father. He invites his brother Zeke and Zeke’s new wife Addy, who are on the run from a crime family, to come and help him.

Muriel Giovanni, Addy’s cousin, was married into the crime family until her husband was killed in a shootout with the police. Then she learns the Giovannis want her new daughter. With the help of her parents, the young widow takes her baby and follows her cousin to Alaska, where hopefully the crime family won’t find her. Or will they?

2. Why did you add a pet to Golden North?

Animals can add so much to a story. They are their own characters, and you can use them as such. I love cats and dogs equally, but for this story, I thought a cat would work well. Our last pet was a dog. I don’t have a picture in my files, but Kayto was a mix. She looked like a Border Collie with black, white and tan markings. She lived to be almost eighteen years old. We didn’t get another pet after she passed for various reasons. 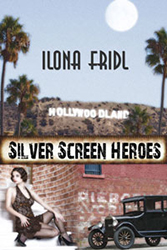 I have published eight books. Golden North is second in the Dangerous Times series along with Silver Screen Heroes, and Bronze Skies. Most of my books are historical, but I do have a woman’s fiction set from the 1960s to the 1990s.

What happens when a motion picture studio in 1920 is taken over by a crime family? Addy and Zeke, a stunt double and a director’s assistant, work with the police to bring the gangsters to justice. But Addy’s cousin has married into the crime family. When Addy is given a key to bring down the family and the studio, will she use it? 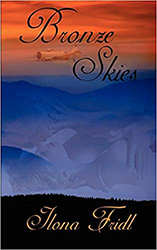 When her plane-crazy high school sweetheart goes off to join the Army Air Corps, Pam Wright writes him often but is disappointed that he doesn’t reply to every letter. She’s lonely, hurting from his seeming lack of interest, and dances with someone else one Saturday night. By the time Pearl Harbor is attacked, Lieutenant Tom Shafer has been home on leave, explained how busy he’s been with officer training, and made sure Pam will be waiting for him after the war. He’s also had a fight with the guy who won’t leave her alone after that one dance. But is it safe to leave her in the same town with this obsessed bully? How can Tom fulfill his promises to protect both his country and the love of his life?

4. Tell us about your reviews.

“Ilona Fridl’s GOLDEN NORTH is truly an adventure worth joining. Take an armchair travel opportunity to go to Alaska. This wild state is a wonderful backdrop for such a great novel.” ~Night Owl Reviews Top Pick (4.75 Stars)

“[BRONZE SKIES is] a quick and enjoyable read that drew me in from the first page to the last even without reading the first two books…There was romance, some laughter, lots of angst, and a few tears. There was family, friends, history, battles, casualties, injuries, a stalker, mystery, and suspense.” ~Romancing the Book (4 Roses)

Because I am in a wheelchair and housebound, it’s almost impossible for me to get out to signings and conferences. I have to rely on the internet to get the word out on my books.

From Marcia: Thank you, Ilona, for being my April interviewee! I love discovering romances that feature animals and look forward to reading your books!