1. I hear you have a Jack Russell Terrier (JRT) in your paranormal romances. Tell us about the series.

Yes, I do! The “Redclaw Origins” series is set in the 1950s, and the main characters have a Nick and Nora (from the 1930s Thin Man movies) vibe to them, so I thought it would be fun to add a little terrier, much like their dog Asta. Of course, being a paranormal romance, nothing is simple! And Captain is not a normal dog…he’s a shapeshifter! The only one of his kind. What he shifts into is a surprise, so you’ll have to check out the story to find out what his other form takes, but I have to say, the dichotomy between my own little JRT’s cuteness and his ferocity when faced with prey was a factor in my deciding on Captain’s shifted form! 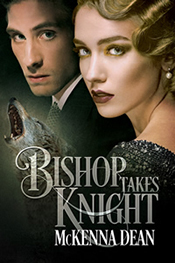 In Bishop Takes Knight (“Redclaw Origins” book 1), we meet former socialite Henrietta (“Rhett”) Bishop as she struggles to find work with her unusual skill set. A misread address and her own pluck win her a job at Redclaw Security, but the new job isn’t what it seems. Mechanical devices seem to have a mind of their own, and Rhett’s new co-workers are a little strange. When she takes down a dangerous intruder in the office, Rhett gets promoted to field agent—and is let in on the secret: Redclaw Security is an elite paranormal agency that investigates matters in the hidden shifter world. One of the unit’s primary functions is to collect a series of mysterious, powerful artifacts and remove them from of the public sector.

The problem is Redclaw Security isn’t the only organization searching for such items.

Enter Dr. Peter Knight: a former nuclear scientist embittered by the murder of his wife. He wants no part of any secret organization, despite having a talent for working with the strange technology. But Rhett convinces him to join Redclaw, and together they become society’s darlings as well as Redclaw’s newest agents. Along with the shapeshifting dog, Captain, and a sentient ray gun bonded to Rhett, they are a force to be reckoned with. It’s Bringing Up Baby meets Warehouse-13 in this award-winning series debut! 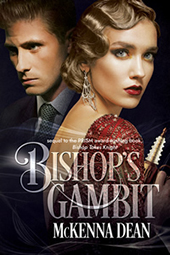 The adventures continue in Bishop’s Gambit, when Rhett and Peter pose as a married couple in a posh 1950s suburban community while investigating a series of deadly paranormal events. After the debacle of their first mission, Rhett has a lot to prove to Redclaw and seeks to carry out her assignment without the distraction of a budding relationship with Peter Knight.

Too bad there’s only one bed in the new house! Or that in Forest Grove, malice is served with a slice of apple pie and a smile.

It’s Leave it to Beaver meets The X-Files in this award-winning installment of the Redclaw Origins series!

Buy Links:  Amazon and these other retailers.

The “Redclaw Origins” books explore the beginnings of the Redclaw Security firm. Set in the 1950s, the romance is closed door, and the emphasis is on the investigations. Rhett is an unconventional woman of the time, having been raised by a much-beloved father who took her on all his adventures around the world. Being relegated to a desk, when she’s a much better shot than she is a typist, was trying for her until she found her place at Redclaw.

2. I heard you have another series featuring the Redclaw Security firm.

“Redclaw Security” is a steamy contemporary paranormal romance series with the emphasis placed on shifters and their mates, along with the dangers facing Redclaw Security agents. Each story can be read as a standalone, though there are cameos of characters from previous installments, and characters getting their own stories are often introduced in the one before. 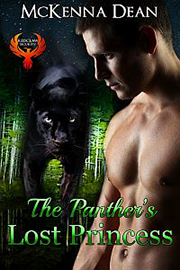 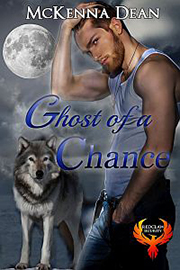 The Panther’s Lost Princess, which is the first in the “Redclaw Security” series, is available on Amazon and KU.

Ghost of a Chance, which is the “Redclaw Security” book 2, is available on Amazon  Barnes and Noble  Apple  Kobo

I have plans for a spinoff series that focuses on a single team within the Redclaw agency which solves Major Shifter Crimes in case-based stories. The “Better off Red” series is on the back burner for the moment. If only I didn’t have a demanding day job!

3. Why did you add a dog to this series?

I work with animals for a living, so I include them in almost every story I write. Dogs, cats, horses, you name it. Animals are such an important part of my life. I can’t imagine not having a pet be a character in a story! I think my animal background is why I’m drawn to shifter stories as well. 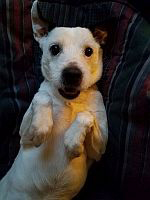 As I mentioned earlier, Bishop and Knight have a real Nick and Nora vibe with their banter as they solve cases, and that alone made me want to include a spunky little dog to the series. But I also inherited Captain, my mother’s little JRT, when she died, and I’ve fallen completely in love with him! I’d never had a small dog before—all my other dogs are German Shepherds. I was worried Captain wouldn’t fit well into our household at first. But he was the BEST addition ever. He meshed in with our family as though he’d always been a part of it: sleeping with the cats, playfighting with the big dogs, and worming his way onto our bed and into our hearts. When I decided to give Rhett a little dog in the “Redclaw Origins” series, I knew Captain was perfect for the role.

’ve also recently begun writing a series of small-town cozy mysteries (so far, nothing paranormal!) under the name M. K. Dean, featuring house-call veterinarian/amateur sleuth Ginny Reese and her trusty German Shepherd, Remington. I am having a LOT of fun with this series, and there are lots of animals in those stories too!

The first book, An Embarrassment of Itches, was released in July 2021, and the next installment, The Dog Days of Murder, will be out in early 2022. It’s Diagnosis Murder meets All Creatures Great and Small!

An Embarrassment of Itches is currently available only on Amazon, but will be coming to other retailers in the near future.

5. Tell us about your kudos or reviews.

Readers and reviewers have been very generous with their praise of my stories! The “Redclaw Security” series won Third Place for Best Romance/Paranormal/Fantasy/Vampires & Shifters in the Paranormal Romance Guild 2018 Reviewer’s Choice Awards.

Ghost of a Chance was also a finalist in the 2019 Bookseller’s Best Awards.

Bishop Takes Knight is a Top Pick at The Romance Reviews and a Crowned Heart of Excellence recipient at InD’Tale Magazine and has been nominated for a RONE Award! Bishop Takes Knight was voted Best Paranormal/SFF Romance in the 2020 New England Reader’s Choice Awards, Best Light Paranormal Romance in the 2020 PRISM awards, and is a Bronze Medal winner in the Royal Palm Literary Awards for Blended Fiction.

Bishop’s Gambit was named a Top Pick by The Romance Reviews! Kirkus Reviews describes it as “thoroughly entertaining and witty, with a nicely judged mix of genres.”

An Embarrassment of Itches is a Crowned Heart of Excellence recipient from InD’Tale Magazine and is a finalist in the 2021 N.N. Light’s Book Awards.

The easiest way to find me is to go to my linktree! There you can choose which pen name/Amazon author page/BookBub/Facebook accounts you wish to follow. There’s a link for my website (which you can also follow) and my newsletter signup as well. I have an Instagram accounts (where I share a LOT of pet pictures), and I’m toying with the idea of joining TikTok, though I haven’t yet. I’m rarely on Facebook, but I post to Twitter a LOT. I tend to post slice-of-life stuff to the website blog most weeks, and almost never send out newsletters, though I hope to get a bit better about that in the future! But if you follow my Amazon author accounts or my BookBub accounts, you’ll always get notification of any new releases.

From Marcia: Thank you, McKenna, for being my January interviewee! I love discovering stories that feature dogs and look forward to reading your books!