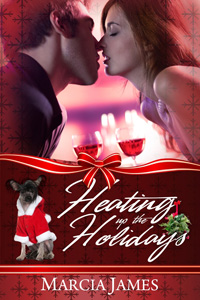 Chris and his daughter stepped onto the elevator after her, and Nicky used her staff key card to send it slowly down.

“What’s that?” Holly, with the inquisitiveness of the young, pointed up at a sprig of plastic mistletoe an employee had taped to the elevator’s ceiling. Nicky picked her up so she could see the holiday decoration better.

“Mistletoe,” Chris explained. “When you stand under it, you’re supposed to kiss the person you’re with.”

Holly giggled, then placed a sticky kiss on Nicky’s cheek, before twisting to her father. “Daddy, kiss us.”

Nicky froze like a reindeer in headlights as Chris leaned down to kiss his daughter’s forehead. Then he turned slightly and met her eyes–his intention clear–before moving his mouth toward hers.

No, no, no, no, no! This man would be gone again in the New Year. The sane side of Nicky’s brain yelled for attention, told her to avoid the kiss, to offer her cheek instead. But she waited, heart thudding, breath hitching, until his lips brushed hers. It was electric, momentous, and God, she didn’t want it to end.

Nicky. He was kissing Nicky Paxton again, and Jesus it felt right. Her mouth was soft and sweet, and she smelled like sugar cookies. Chris had been back in Paxtonville for a week, but with this…he finally felt he was home.

More. His brain was monosyllabic and demanding. His hands were filled with bags, dammit, so he couldn’t drag her closer. Instead, Chris tilted his head for a better angle even as he knew for some reason it was a bad idea to deepen the kiss…

Holly clapped her hands in delight.

Oh, yeah. Five-year-old daughter. That’s why this wasn’t cool. As he drew back, Chris stared into Nicky’s dazed eyes, pretty damn sure he looked just as stunned. She snapped out of it first, however, when the elevator dinged and opened on the first floor.

Nicky heard Chris mutter something under his breath, but she kept walking toward the foyer of her home. If he didn’t want to leave, he shouldn’t have ended what was the sexiest damn kiss she’d had in thirteen years. Of course, she had no plans to actually let the too-honorable-for-his-own-good man walk out her front door. He was back in town to stay, and she was staking her claim on him tonight.

She stopped by the main staircase and hung his leather jacket on the mahogany newel post. Then wiping the huge grin off her face–something Chris wouldn’t appreciate under these circumstances–she turned to meet his disgruntled gaze. “Thank you for the pizza and wine.”

Chris nodded. His expression was pleasant, but a vein ticked in his temple.

Gesturing to the snow-battered windows in her nearby living room, she continued. “Looks like the weather’s gotten worse. Could be a dangerous drive back to your place. Did you say Holly is sleeping over at your parents’ house tonight?”

He nodded again, a mix of hope and amused suspicion flickering in his eyes. Maybe she wasn’t so skilled at presenting a poker face.

“Well,” Nicky glanced at the nails of one hand in an exaggerated show of nonchalance, “then I guess you have two choices.” She met his gaze again, her lips curving despite her efforts to control them. “You can put on your jacket and head out, your virtue intact. Or…you can come upstairs and show me your tan lines.”

He made a grab for her and she danced away, laughing. Chris put his hands on his hips and smiled. “You had me going there, brat. I thought you were throwing me out.” He pointed to the floor in front of him. “Come here and kiss me.”

“Like I’d take orders from some surfer-dude lawyer.” Whirling, she charged up the staircase with Chris on her heels. Nicky made it almost halfway to the second floor before he caught her and lifted her into his arms. It was like flying. The autumn of their senior year, he’d picked her up just like this, then thrown her into a pile of leaves they’d raked together. Those had been such wonderful times. Tonight they’d make even better memories.

She circled his neck with her arms as he took the rest of the stairs two at a time.

When he reached the upstairs hallway, Chris asked, “Which room?”

Nicky tugged on the hair at his nape. “Put me down before you get a hernia.”

Lowering his head, he nibbled her ear. “You’re a flyweight, Nickels. And unless you want our first time together as adults to be against this wall right here, you better tell me which room.”

A delicious full-body shudder ran through her, one that literally knocked off her fuzzy slippers. “Why don’t we save the wall ’til next time.” She pointed down the dark corridor. “Last room on the right.”