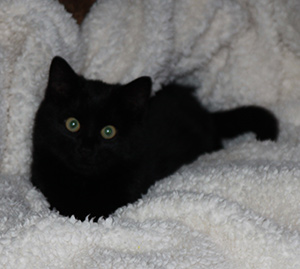 (NOTE FROM MARCIA: Instead of putting an author photo here, Daryl chose this adorable photo of Licorice, saying it was from “the day after we rescued her. Her mother was feral and had to abandon her.”)

1. I hear you have a horse and a dragon in your novel. Tell us about the book.

The Last Dragon is my medieval fantasy romance and yes, there is a horse. His name is Gladur, and he is Prince Hawkyns’ mount. He is a Charger. That is the general name for the type of horse a knight would ride. The breed would be Friesian. A horse big enough to carry a knight in full armour. Gladur has been trained to help Hawkyns in his quest.

What is the Prince questing for? A vicious devil-monster called Ayrradex. Telling you anymore will give away spoilers. So, I will let the blurb leak out any teasers.

What do dragons, knights and romance have in common? Grab a copy of multi-published author Daryl Devore’s medieval fantasy romance–The Last Dragon–and discover the answer.

A sorcerer craving dominance merged with a dragon, the power overwhelmed him causing him to split into three dragons. Demora ruled thought but was lost in time. Yidithe offered protection, shining like the light of the sun. Ayrradex craved chaos, reveling in destroying souls.

Many knights died attempting to slay the devil beast. One knight, Prince Hawkyns, did not fear death. He’d lost everything. Away on a mission when Ayrradex attacked his father’s kingdom, Penrythe, Hawkyns returned to find his noble father – feeble and defeated. His wise mother–crazed. His beautiful wife and unborn child–dead. Only a pile of ashes remained for him to bury. He knelt before his King and vowed to slay the devil-beast or be slain.

Derry was born with powers that terrified her parents. They delivered her to a nunnery to be raised in secret. Jathe, a wise sorceress, discovered the young girl and trained her to one day use the secret hidden in her soul.

Legends spoken around campfires hinted the sole way to destroy Ayrradex was when the hearts of a knight and a golden dragon became one. But after a vicious battle with Ayrradex, the golden dragon was thought to be dead.

Can Prince Hawkyns’s bravery and Derry’s powers end the reign of the devil-beast’s terror?

2. Why did you add the horse and dragon to this romance?

I didn’t add the dragon to the story. It is the reason for the story. A long time ago, I wrote another medieval romance, and someone mentioned that while reading it they kept expecting a dragon to pop up. Well, that thought nestled itself in the back of my mind and then one day, the dragon flew forward and demanded that the story be written.

The horse was an obvious addition. The knight had to ride something. 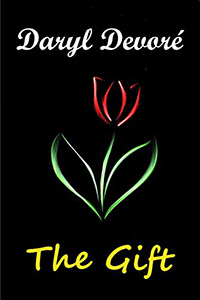 Numerous other books. I don’t stick to one genre or heat level. I have numerous hot romances. Some sweet romances and some New Adult books.

I have an unusual episodic romance–The Gift–that also has two great pets: a large bumbling sheepdog (Reginald) and an adorable little kitten (Tulip).

I am currently writing another medieval fantasy that is filled with other animals and creatures. There are two horses–Cheffyl and Hickory. And I was thinking of adding a unicorn.

My favourite review for The Last Dragon came from The Reading Café. This is the bottom half of a long review:

“This has the potential to be a film, I was drawn into the pages, and time just ceased to exist! Beautifully written, thought out well, and executed brilliantly. The characters were so different from what I’ve read. Hawkyns feeling he’d let his father and family down. Derry wanting more from her life.

“There is a twist to the story that I totally didn’t see coming. In fact there was two… It’s a slow-burning love story, which is nice to read once in a while. The action is fast-paced and well-written. The fury and anger that both Hawkyns and Derry feel is well explained. How could a village turn on Derry? And how can they think of even offering up the new born babe to the dragon? I liked when Hawkyns explains to Pariset that he would be honoured to be his friend and King in the future.

“          So does Hawkyns defeat the dragon? How is Derry pivotal to the plot? And can they honestly be together when Fate may have different plans for them? Love may not conquer all!!!

“I’m hoping for more stories in this land. I’m hoping to see more of Pariset, Derry and Hawkyns. Do I recommend this book? Hell yes I do. Knights, dragons, fair maidens and magic. What’s not to like and recommend. It’s George and the dragon meets Disney and a whole lot more!”

I have a blog. I do interviews on other blogs. Did a book blog tour. Also, I promote my books on Twitter, etc. Below are some links where a reader can find my book and learn about it or get a copy to read and review.

Also, for this book, I had an audio version made to add to availability of it. More about this at the end of my interview.

Best place to learn about my books is either:

My blog: Romance–Sweet to Heat. All my books are on the sides. Sweet romances on left. Hot romances on right. https://daryldevore.blogspot.com/

My Newsletter. It comes out every other month. Email me at daryl.devore@yahoo.ca

To connect with me–and I love chatting with readers–either leave a comment on my blog or tweet me @daryldevore. I am on lots of different media, but I use Twitter the most.

From Marcia: Thank you, Daryl, for your interview AND for your offer of an audiobook! I love discovering romances that feature animals–including dragons!–and look forward to reading your books!