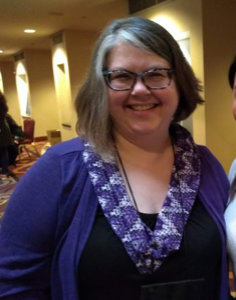 1. I hear you have pets in your novel, A Guardian’s Destiny. Tell us about the book. 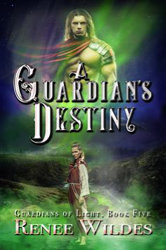 A Guardian’s Destiny is Book 5 in my 7-book Guardians of Light series published by Champagne Book Group. (Each book is stand-alone, while also fleshing out the same fictitious, magical world.) It follows the epic journey of Verdeen, a newly graduated elven shieldmaiden who was once Queen Dara’s lady’s maid (from Book 1, A Guardian’s Heart), But Verdeen wanted more, and Queen Dara allowed her to attend the warrior academy. But sometimes fate takes you in unexpected directions:

On what should have been Verdeen’s proudest day, she is blocked from advanced warrior training because no war mare chooses to bond with her. Burning with humiliation, she accepts a lesser assignment to the Isle of Ice, serving as bodyguard to human riever, Daq Aryk.

Verdeen’s never paid much attention to men, so focused was she on her training. But she quickly realizes hieing off into a distant wilderness with Aryk is a bad idea. He makes her lose all focus and perspective.

Aryk faces a difficult task: molding six warring clans into a peaceful whole. He’s got nothing against women warriors, but Verdeen is young and inexperienced, her beauty a potentially fatal distraction. She’s a shield-maiden, not a bedmate. But the way she melts at his every touch erodes all his good intentions…and sense.

One kiss unleashes the kind of feverish desire that should occur only once in a lifetime—with a mate. But as their quest takes ever more dangerous twists and turns, their bond could be the one thing that unites a nation. Or make Aryk’s worst nightmare a blood-soaked reality.

Warning: Contains fire and ice, never-gratuitous sex and violence, sword play and self-play, spying and lying, noble intentions and betrayal. In other words, a rollicking good roll in the proverbial hay.

2. Why did you add pets to your book?

Because the love of pets unites us all into a commonality, and how we treat those smaller and weaker than ourselves reveals what kind of person we are. They enhance our existence and teach us a lot about ourselves. They do the same for m 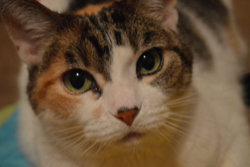 y characters, allowing my readers to identify with characters made that much more real and sympathetic and believable.

I have three cats, a dog, and a horse. All seniors with health issues, all rescues. I am my vets’ best client. They are family and I would do anything for them.

My oldest cat Chandra is a sweet calico, 18 & deaf, with a heart murm 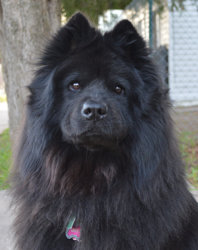 ur & kidney failure. My gray Morab mare Sassy is 15 and retired after insulin-resistant metabolic disorder caused her to founder severely a year ago. Both of my male tabby cats are 7 and afraid of anyone not family. Riley is additionally burdened with neurological issues and recurrent dental disease.

My black Chow Abby is 10 with arthritis of the spine and a lifelong special diet after almost dying from bladder stones.

Aryk would do anything for his dog, Fiske, as well. (Picture a red Akita) Here’s a snippet of a scene of a mountain rescue:

Rounding a clump of boulders like scattered marbles, Aryk paused and frowned at the path ahead. A fine latticework of ice crystals covered the surface, as if it had melted and refrozen. He crouched, pointed to a jagged line transecting the snow. Valkyn studied it as well and nodded.

“Partial thaw,” Aryk said. “Might’ve weakened this area. We cross above that line.”

They proceeded with caution. Fiske’s fur stood on end as he sniffed the air and paced back and forth, staying close to Aryk. Snow creaked and crunched underfoot, as if the Horn groaned at their intrusion. Ominous clouds crept across the sky. The dim light crushed her spirit. The Horn no longer seemed benign. It waited

A sharp crack and Fiske’s startled yelp were the sole warnings as the snow collapsed beneath the dog’s paws, and he dropped. Verdeen screamed as he disappeared into the ground.

Aryk hurled himself to the snow, clutching the line. He wound the line around his hands, drawing the dog back up with every coil.

She didn’t dare move, scarce dared breathe, as Valkyn crept forward on his belly to the edge of the crevasse and snagged Fiske’s harness when the dog came within range, hauling him back onto solid ground. The shaking, whimpering dog tottered to Aryk, who yanked off his gloves and hauled the dog close enough to bury his face in Fiske’s red fur.

Her heart thundered as Valkyn eased away from the treacherous opening. They’d nigh lost Fiske. She’d gotten attached in a few days. How much worse for Aryk, who raised him from a pup?

I am a 3-time Epic finalist, a 2-time Ecataromance Reviewer’s Choice Award winner, a 2-time WisRWA Reader’s Choice finalist, an LRC Best Of runner-up for fantasy romance, an OTFS winner, an Ignite the Flame runner-up & a Sheila finalist.

So much magic, so many twists and turns and so many strong heroines! “A Guardian’s Destiny” does not disappoint at all. Verdeen’s pride is wounded, when she is forced to accept a lesser mission. Little did she know the dangers she would face. Aryk also has to face his own pride, when having to trust a woman, as a warrior.

Business set aside, they learn the connection they share runs beyond the field of battle. They will discover the passion one kiss can unleash. Is this enough for them? The world is full of dangers and they have to face a lot!

I don’t know if this is exactly the “crown jewel” of the series, because I have enjoyed all of them. But I do believe this is yet another one full of lies and intrigue. With a twist I never saw coming, I was completely hooked into this world.

After reading this entire series, I can say I’ve missed this feeling of devoting my time to 5 books! I loved the combination between magic, at certain levels, magical beings and shifters and romance. I was hooked and I still am! I plan to revisit the series and follow the author closely!

Here’s what the Library Journal had to say about A Guardian’s Destiny, back when it was first published with Samhain as Riever’s Heart:

After a bloody battle with his fellow Isadorikjans, Daq Aryk decides to travel to the south to get help in uniting the tribes of the frozen north. Aid comes in the form of Verdeen, a feisty Elven champion who is struggling with balancing the warrior of her personality with the awakening woman. As they journey toward Aryk’s home, they must contend with Verdeen’s skepticism, the elements, and enemies, to say nothing of the growing heat between them. This historical fantasy romance steams its way through a traditional hero’s journey home. Readers will enjoy the layers of lovemaking that are balanced with an exciting story line. Between the bloodsport and the intense relationships, there is really something for every romance or fantasy enthusiast here.

Verdict If you like your icy landscapes with some hot love scenes, this is the book for you! Well-drawn characters with lots of facets placed in exciting situations; a fun page-turner.—Emily Thompson, MSI, Ann Arbor, MI

Marcia James: Thank you, Renee, for stopping by my Go Pets blog! I look forward to reading your novels!