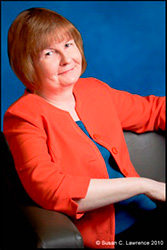 Hi, Marcia, and a big thank you for inviting me to the blog! Though I love all the books I’ve written, I have to admit this first one I’m mentioning holds a special place in my heart. It’s the story of a hero who suddenly becomes a daddy to a four-year-old girl, a child he’d never known he’d fathered—a child he can’t communicate with because she speaks only in sign language.

Little Becky forms a special bond with a puppy who shows up in her yard as unexpectedly as she has appeared in her daddy’s life. 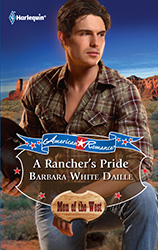 A Rancher’s Pride is book one in the Flagman’s Folly series. This is the blurb from the back cover:

His Whole World Is In Her Hands

Sam Robertson’s life just changed. In one short day, he found out that he’s a daddy; that his beautiful little girl, Becky, is deaf; and that her aunt, sign language teacher Kayla Ward, intends to fight him for custody.

There are plenty of reasons Sam shouldn’t fall for Kayla. A city girl like her has no place on his ranch, particularly when she’s his ex-wife’s gorgeous sister. But thanks to the judge’s orders, Sam’s spending a lot of time with Kayla, trying to give Becky the stable home she’s never known.

Despite their ongoing custody battle, Sam and Kayla’s love for Becky brings them closer than they ever expected, and Sam knows that no matter who wins in court, he could still lose—Kayla or his daughter.

Here are some of the places you’ll find A Rancher’s Pride:

In the case of A Rancher’s Pride, I didn’t have much choice! 🙂

Sam’s life may have changed drastically, but so has Becky’s, and naturally she’s a bit lost and confused. When a mixed-breed puppy bounds into Becky’s new backyard, she’s thrilled to make a friend and immediately “adopts” and names the pup. No spoilers here, but. . . the name Becky gives the dog is tied into his description and relates to her character. She and I both just fell in love with the little guy. : ) Here’s a peek at him through the heroine’s eyes:

Kayla moved over to the screened door and saw Becky outside with one of the ranch animals, a puppy. He looked like a Labrador-Shepherd mix. His body and nose were dark, his face tan. A large dark patch of fur completely circled one eye, giving him a permanently startled expression.

I write short contemporary romance, usually on the sweeter side, though some have been called “sensuous” by reviewers. Although many of the books are in series, all my books are standalones in that the hero and heroine of each book reaches their Happy Ever After by the end of their story.

There’s a printable list of my books at my website (under the Books tab), and I’ll share a bit about a few of the stories below. 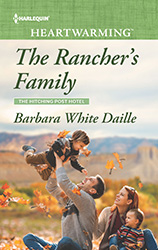 The Rancher’s Family, my first clean romance from Harlequin Heartwarming, celebrates its book birthday this month!

She certainly hopes so…

After a devastating loss, Cara Leonetti’s dreams of a husband and children are on hold. But Cowboy Creek’s local matchmaker thinks otherwise! And Cara finds herself unexpectedly entangled in the day-to-day family chaos of widower Wes Daniels and his two small children. She’s falling hard, but the strong, silent rancher doesn’t trust in love. Can Cara put her own fears aside and show Wes that they’re stronger together? 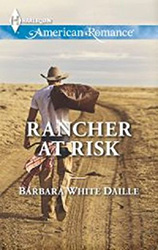 Rancher at Risk features a deaf heroine who is related to both Kayla and Becky from A Rancher’s Pride:

After the loss of his family in a tragic accident, Ryan Malloy has been given one last chance to change his life. His boss sends him to Flagman’s Folly, New Mexico, to run his ranch, but unfortunately, Ryan’s troubled attitude lands him in hot water with the locals, especially the ranch’s manager, Lianne Ward.

Deaf since birth, Lianne has never let her disability define who she is. But, she’s yet to meet a man who treats her as an equal. Ryan seems different…that is, when they’re not butting heads over the ranch’s new school for disadvantaged boys.

Forced to work together, Lianne and Ryan discover an unexpected attraction beneath their quarreling. But will Ryan’s painful past drive them apart…permanently?

The Snowflake Valley series from Entangled Books includes the holiday stories Snowbound with Mr. Wrong and One Week to Win Her Boss. 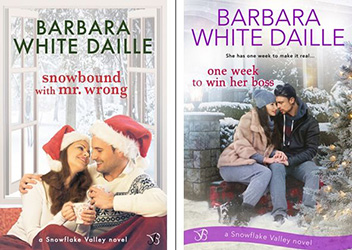 One Week to Win Her Boss:

Single mom Amber Barnett loves family, kids, Christmas…and unfortunately, her boss, confirmed bachelor Michael DeFranco. It’s a crush she really needs to get over. Except, when she’s temporarily forced from her apartment, her only option is to stay at Michael’s private ski lodge, where she’s the housekeeper. No problem. Her handsome boss rarely visits Snowflake Valley unexpectedly, plus he’s spending the holidays with his family. Or so she thinks…

A stormy Christmas Eve reunion leaves Michael seeking the solitude of his lodge, where he finds Amber in residence—and in trouble. Attempting to save her from her matchmaking family, he announces they’re a couple. His good deed backfires when they’re instantly included in each and every holiday event in town. So much for solitude.

Only the more time he spends with the beautiful, cheery brunette, the more he yearns to make things real between them. But he and Amber want different things, and Michael could never be the family man she’s looking for.

Last but not least, Family Matters is a book about a heroine whose full-time job appears to be rescuing one member or another of her large and crazy Irish family. And The Sheriff’s Son and Court Me, Cowboy, my first two published books, are set in Dillon, Texas.

Not The Present He’d Expected This Christmas

Three weeks. Gabe Miller’s marriage ended in divorce so fast it had hardly begun. Which is why he couldn’t quite believe his luck—or his “ex”—when she returned a few months later with the news that legally they were still husband and wife. And that the child she was carrying was his son.

It looked as if Marissa might bolt again, making a custody battle his only option—unless he could turn back the clock and woo her the way he should have during their whirlwind affair. But even with his boy’s future at stake, mending fences with a woman—especially the one he loved—wasn’t something the strong, silent type found easy to do…. 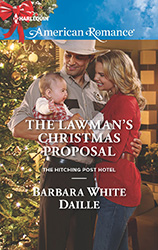 My books, short fiction, and works-in-progress have won or received nominations for awards such as the RT Book Reviews Reviewers’ Choice Award and the CataRomance Reviewers’ Choice Award. They also have won or reached finalist standing in a number of Romance Writers of America chapter and other, non-romance, contests. Several of my books received TOP PICK ratings from RT Book Reviews.

The Lawman’s Christmas Proposal, one of the Hitching Post Hotel books, was included in USA TODAY’s Happy Ever After Best Romances. A review of the book says, in part: “[Daille] deftly offsets tension and drama with the antics of an interfering family, and builds to a happy ever after that resonates with healing and hope. Say ‘I do’ to The Lawman’s Christmas Proposal—you’ll be so very glad you did.”

5. What made you become a writer?

This question is always one of my faves! When I was a little girl, I used to see my mom sitting at our kitchen table with something she called books. She taught me these volumes held wonderful stories, and soon after she started reading children’s books aloud to me, I began “writing” stories of my own. These were scrawled in crayon on construction paper because I couldn’t read or write.

We often visited our local library, where the rule was that to get your own library card, you had to be able to write (or print) your name on the application. That day came for me when I was about five or six years old and barely tall enough to reach the top of the librarian’s desk to hand over my paperwork. That was one of my proudest days ever, and libraries have always been among my favorite places. My hope as a writer is that my books will give as much enjoyment to my readers as other authors’ books bring to me.

Readers – I hope you’ll check out my website, consider signing up for my newsletter, and look for me at my blog or on social media:

Also, leave a comment or question or share a pet story or photo in the comments below my blog post, and during the first week of October, I’ll pick a winner to receive an autographed print copy of one of my available backlist books. (Open to US/Canada mailing addresses only, please, and based on book availability at the time the winner’s name is announced.) Check for my comment here at the blog after the first week of October to see if you’ve won!

Marcia James: Thank you, Barbara, for stopping by my Go Pets! blog! I look forward to reading your books!

READER INVITATION: Want to win a FREE Marcia James’ ebook? Visitors to this pro-pet blog can join in the fun, comment, and/or share photos of their pets for a chance to win one of my ebooks! Each month, I’ll randomly pick one commenter to win. To leave a comment and/or a photo, click on the word “Reply,” which is just below the social media icons for THIS interview. (Don’t scroll past this interview to the next interview.) Go Pets!